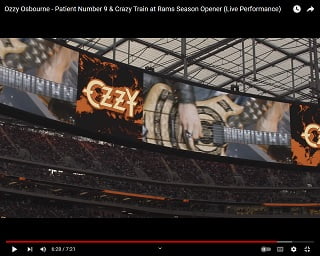 Making a special live appearance, Ozzy Osbourne performed at halftime of the first game of the NFL season featuring the Buffalo Bills vs. the defending Super Bowl champions, the Los Angeles Rams.

It was a special moment for a number of reasons, only one of them being the fact that Osbourne release his new album Patient Number 9 on Friday (Sept. 9), making the timing of this all too perfect.

Ozzy opened with the title track to the new record, flanked by producer Andrew Watt on guitar, Chris Chaney on bass and Tommy Clufetos on drums. Zakk Wylde then joined them onstage to play “Crazy Train.”