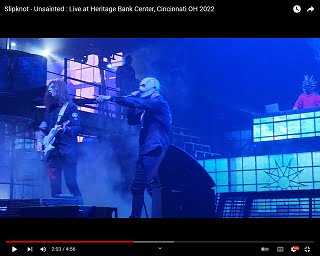 Slipknot played a concert June 1st in Ohio, and during the show, the band stopped their performance so that Corey Taylor could direct EMTs to a fan in the crowd who appeared to be struggling and in need of medical attention.

Fan-filmed footage shows that Slipknot were in the midst of playing the second verse of the We Are Not Your Kind song “Unsainted” when Jim Root nudged Taylor and pointed toward the audience.

“Hold on. Hold on guys, hold on,” the vocalist said to the band and pointed in the direction of the fan. “Guys we got something going on right there. Can we get EMTs in there? Everybody back up, give some room. Give some room, make sure they can get in.”

Taylor praised his bandmates for being the ones to notice the incident and bring it to his attention, and the crowd cheered for them in response. Once the singer confirmed that the fan had been safely escorted out of the crowd, he said, “I just want to make sure they get somewhere where they can get looked at, guys, I promise,” and he thanked the audience for cooperating and being patient.

This is the second time in 2022 that Taylor and the rest of Slipknot have paused a show to bring attention to someone who was in need of medical help in the audience. Back in April, Taylor cut the band off while they were playing a concert in Winnipeg to direct medical personnel to a fan who was on the ground in the pit.