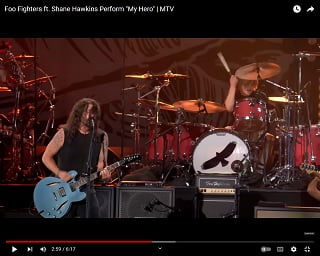 The Foo Fighters said goodbye to their late drummer Taylor Hawkins, who died in March, in epic fashion. The band headlined the star-studded “Taylor Hawkins Tribute Concert” at Wembley Stadium this weekend, a more than five-hour show, featuring such big-name guests as Queen, the members of AC/DC, Rush, Metallica’s Lars Ulrich, The Pretenders’ Chrissie Hynde and many, many more, including a surprise appearance by Sir Paul McCartney.

While there were plenty of highlights of the night, the two most emotional moments came from Foo frontman Dave Grohl, and Taylor’s son, Shane Hawkins.

For Dave, who was on stage for most of the evening, the weight of his loss really got to him as he got choked up and could be seen visibly crying while performing “Times Like These.” Equally emotional was Shane’s appearance, taking his father’s place behind the drumkit for the Foo classic “Hero.” The night ended with a solo Dave performing the Foo classic “Everlong.”