Falling in Reverse’s Ronnie Radke Battles Himself in New Video 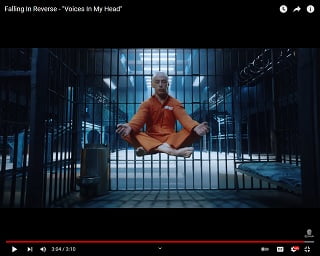 Ronnie Radke is anything but zen in the latest video for Falling in Reverse‘s new song “Voices in My Head.”

The band just dropped the new Jensen Noen-directed video which finds the Falling in Reverse frontman often at odds with himself in the most violent of ways. It’s Ronnie vs. Ronnie…vs. Ronnie, as various iterations of the musician are offing the others in a variety of brutal ways.

“I wanted to capture what it’s like battling with your your past, present, and future perception of self, and the voices in everyone’s head hindering them from their full potential,” explained the singer, sharing his vision for the rather graphic video.

The song follows the recently released “Zombified” single issued earlier this year and both songs will appear on the band’s forthcoming Neon Zombie EP.

The post Falling in Reverse’s Ronnie Radke Battles Himself in New Video appeared first on 97.5 The Zone.