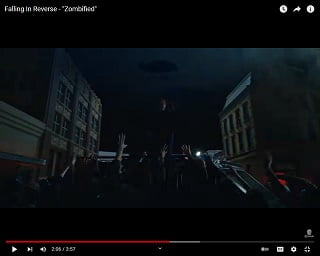 Falling in Reverse are hoping to wake up the masses with their first musical statement of 2022. The band just dropped the anthemic new track “Zombified” that comes with a horror-themed video that you can check out below.

The Jensen Noen-directed film finds the Falling in Reverse crew in the midst of a horror film invasion, first fending off a dystopian world increasingly inhabited by zombies, but that’s just the beginning of their worries as more foes enter the fray.

While the clip takes its nod from the song title, including zombies within the narrative, Falling in Reverse appear to have a broader perspective on the term “Zombified” in mind for the song. Singer Ronnie Radke warns, “The monsters aren’t living under your bed / They are voices in your head,” laying out a lyrical narrative that should make listeners question how they receive their information and what it’s doing to our collective mindsets.

The post Falling in Reverse Sound Wake Up Call With Anthemic New Song ‘Zombified’ appeared first on 97.5 The Zone.