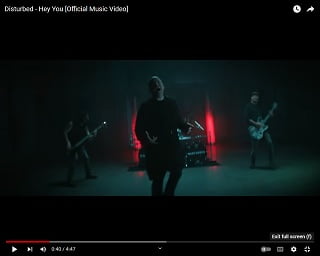 Disturbed are back with a brand new single “Hey You,” which serves as their first music release in four years. They also put out a cinematic sci-fi video to go along with it.

Late last year, frontman David Draiman teased that the band’s follow-up to 2018’s Evolution will be “angsty” and “aggressive,” further adding that it’ll sound like “old-school Disturbed.” The vocalist placed it between The Sickness and Ten Thousands Fists in terms of their discography — and based on the galloping rhythm of “Hey You,” his description seems to be pretty accurate so far.

“‘Hey You’ is basically a wake-up call. I think that the lockdown and the pandemic in general, the past two years, three years of our existence already at this point, has been this incredible, perfect storm of elements,” Draiman explained of the song during a new interview with Loudwire Nights host Toni Gonzalez.

“We had isolation, we had removal from any kind of normalcy, we had people really go down the rabbit hole of social media in a big, big way. And if anything, it intensified the division that was already there. People really stick to their respective camps and their respective allegiances, whether it’s political or religious or otherwise. It’s become hyper-intensified over the course of these past number of years.”