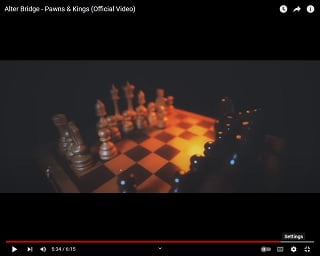 The battle lies ahead, but Alter Bridge are ready to meet it head on. And they’ve got the perfect song to soundtrack that sentiment, as the band has issued the title track from their Pawns & Kings album along with details of the forthcoming release.

After venturing out for their other respective projects Myles Kennedy and Mark Tremonti are back in the fold with drummer Scott Phillips and bassist Brian Marshall to put the final touches on their Pawns & Kings album, which is on track for an Oct. 14 street date through Napalm Records.

The new track, which closes the upcoming record, is filled with the soaring and uplifting vocal work we’ve come to expect from vocalist Myles Kennedy, while the band delivers a full throttle backing filled with hard hitting drums and Tremonti’s standout solo riffing. It’s a heavy, aggressive start to this latest chapter being added to the band’s legacy.

For this latest effort, the band once again worked with longtime producer Michael “Elvis” Baskette. They’ve continued to push the envelope on their storytelling, with the opus “Fable of the Silent Son” now becoming the longest song in their catalog, clocking in at an epic 8:29. Other standouts include the album opener “This Is War,” “Dead Among the Living,” “Silver Tongue,” “Holiday” and more.